Seven local Freemasons enjoyed the delights of County Cork at the southern end of Ireland with impeccable organisation and planning by Bro Walter.

During the trip they visited the Provincial Grand Temple in Cork, a brief history of which can be read here.

In Cork airport enjoying a cup of coffee. 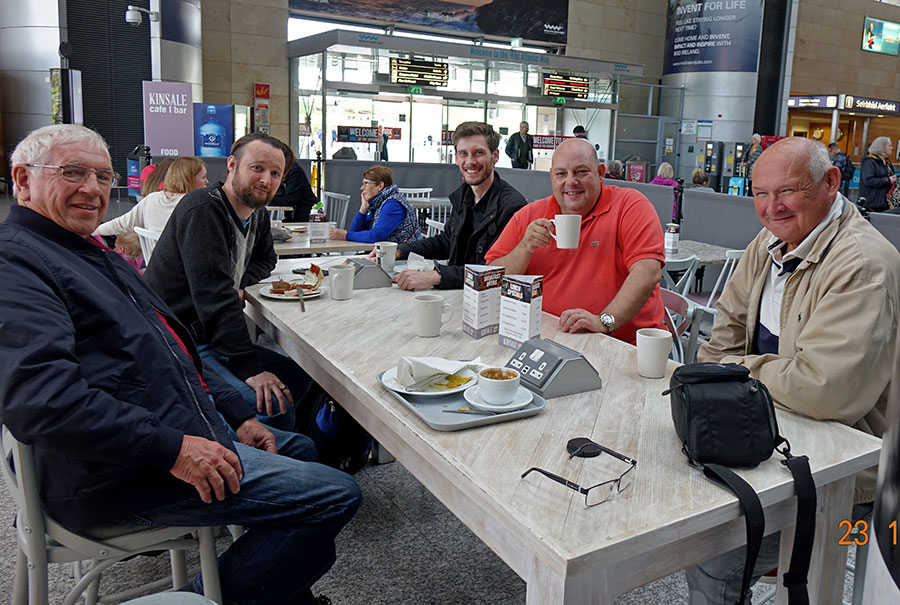 A minibus took us down to Skibbereen, south and a bit west of Cork, where we checked in at the West Cork Hotel and had our first Murphy’s. 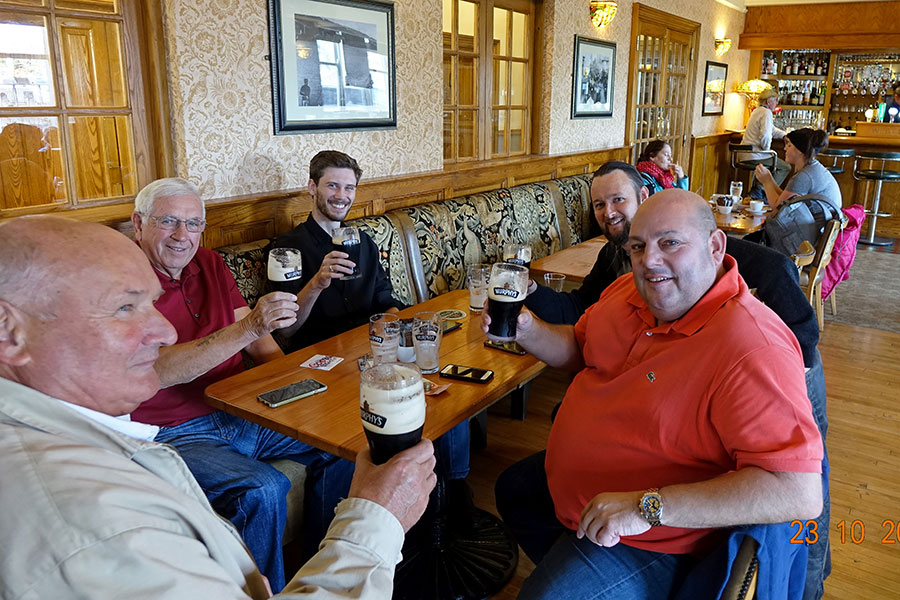 Back in the minibus, along the coast 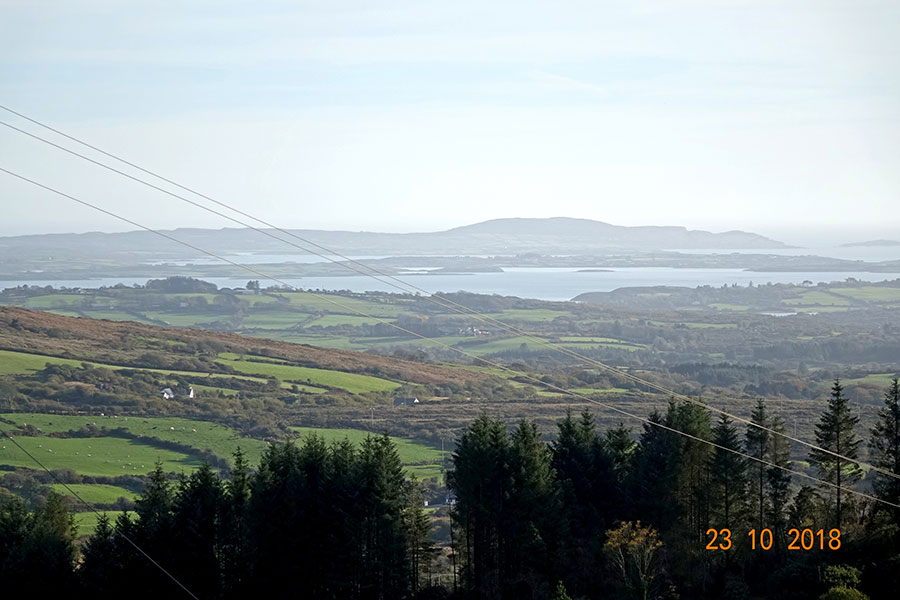 we went, to Bantry for lunch, where we were joined by Bro. Walter’s father Pat, and sister Heather. 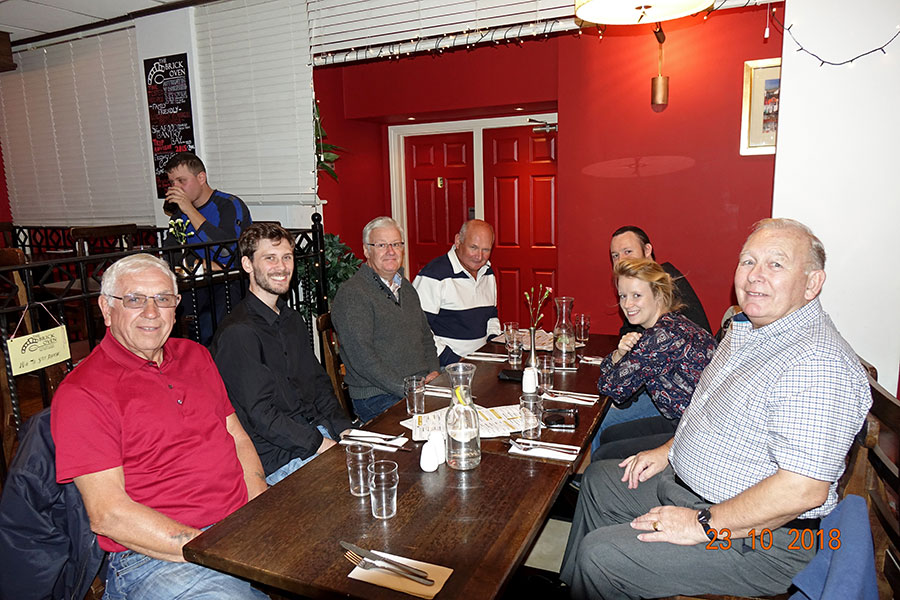 Back in Skibbereen we were guests at a Royal Arch meeting in a small but lovely Masonic Hall. 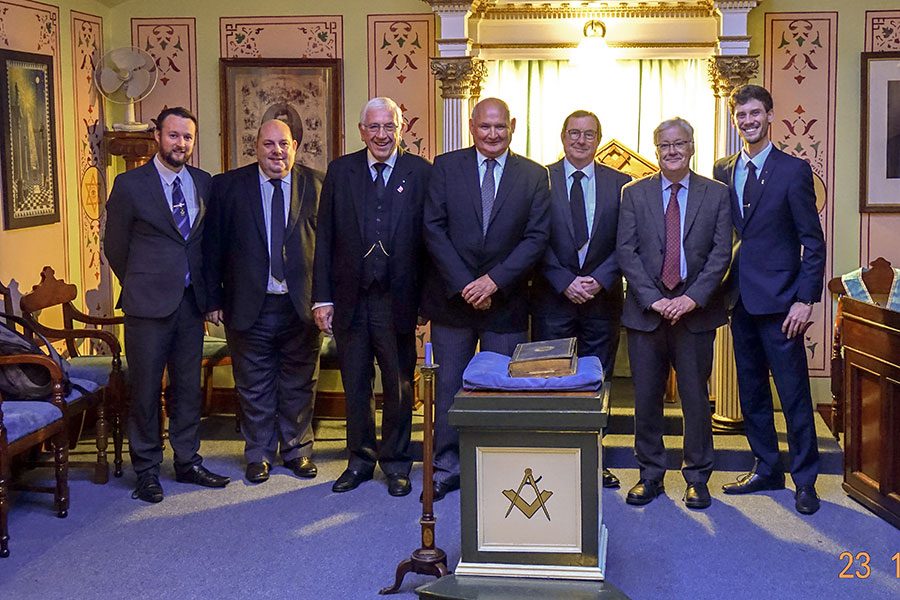 The ritual has some things in common with our own working but the differences are marked. Note for example the pedestal in the centre of the Chapter room. Along the walls you will see the veils, a major feature of Irish working. 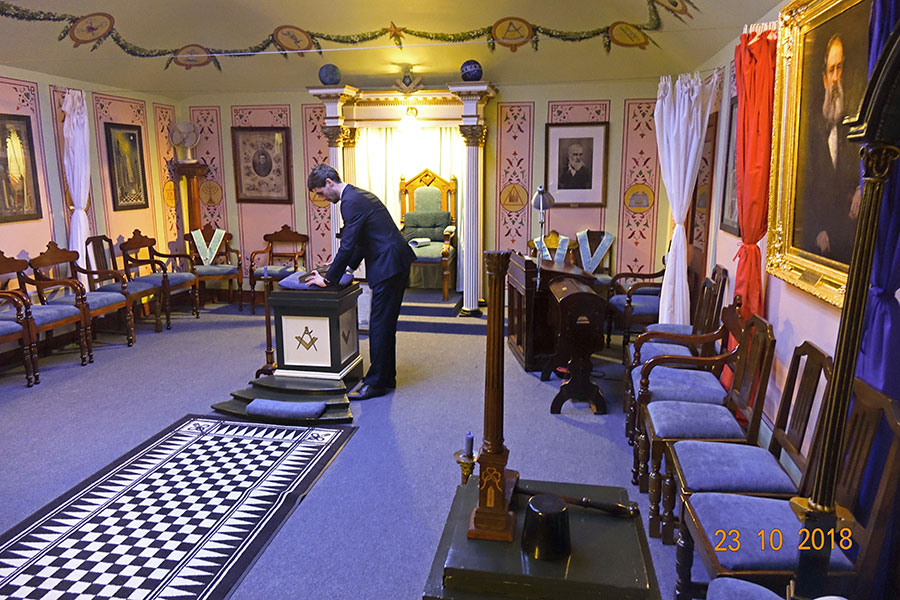 The companions made us very welcome. 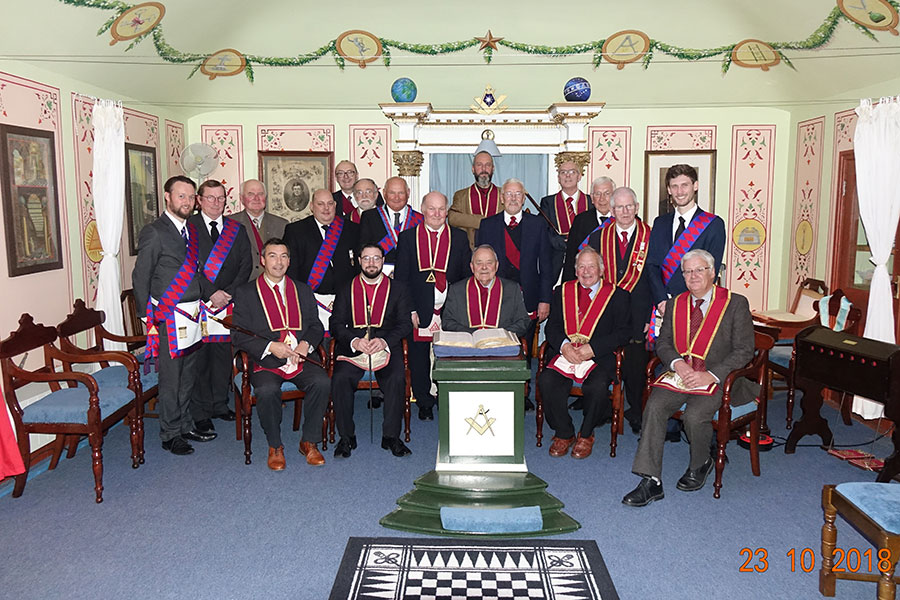 In this photo of the companions you can see clearly the tall figure in the centre known as the ‘Excellent King’. 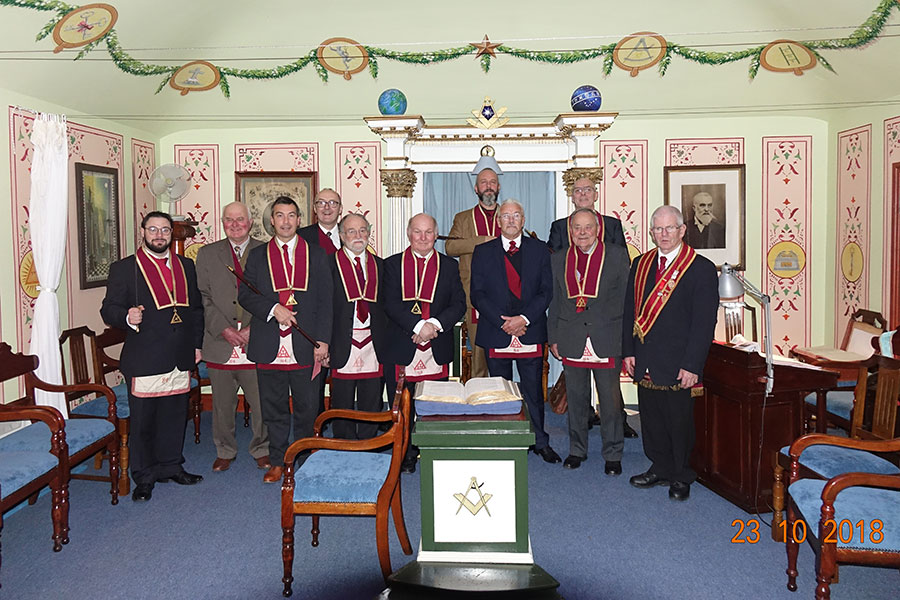 Next day we journeyed up to Cork itself where W. Bro. Ken, Past Treasurer of the Irish Grand Lodge, gave us a tour of the magnificent Provincial Grand Temple. The building dates from 1770 and became Masonic premises in 1884. You can read a brief history here. 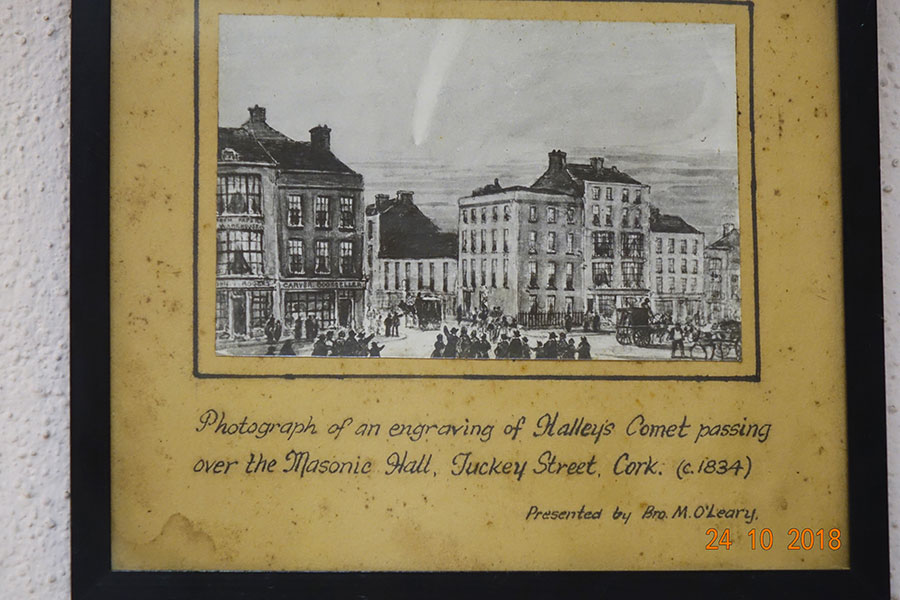 Our tour started at the top of the building in the lovely Royal Arch temple. 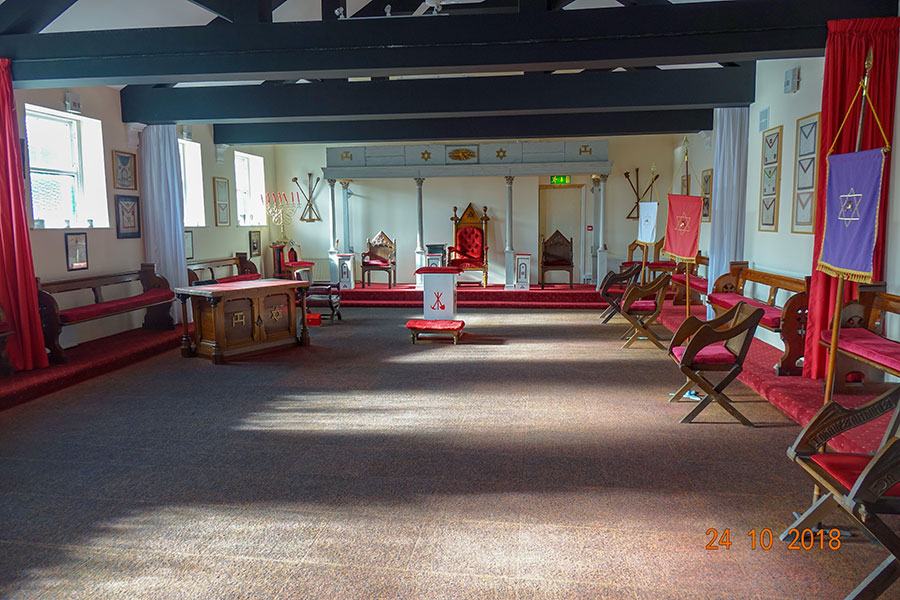 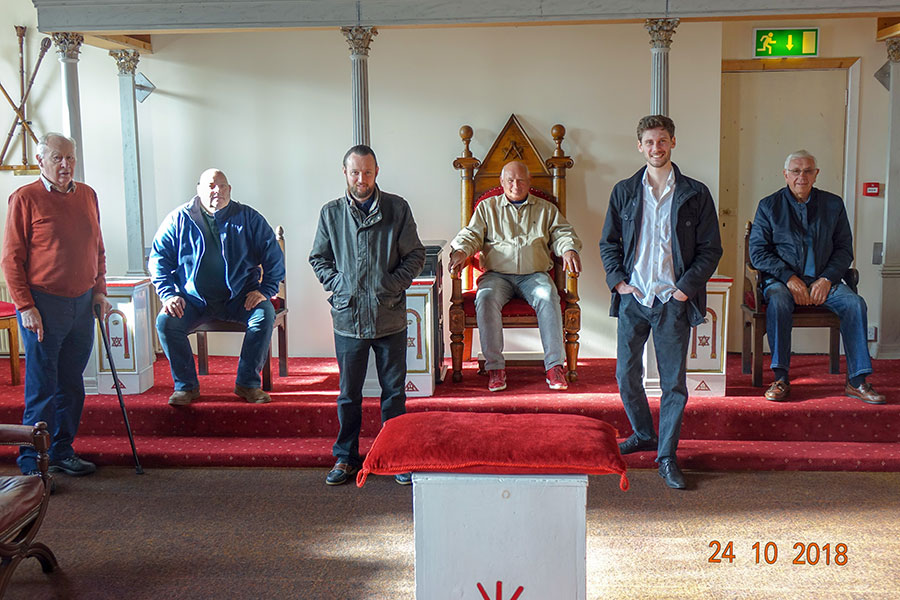 Here is a close-up of the veils. 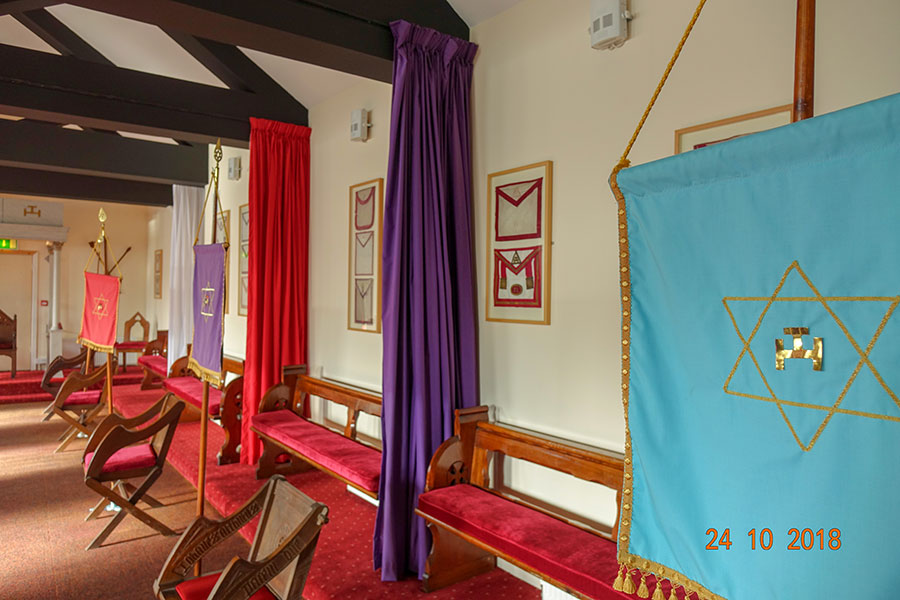 The Royal Arch ritual features a vault, usually a figurative place, but not so in Cork. Here is a genuine vault 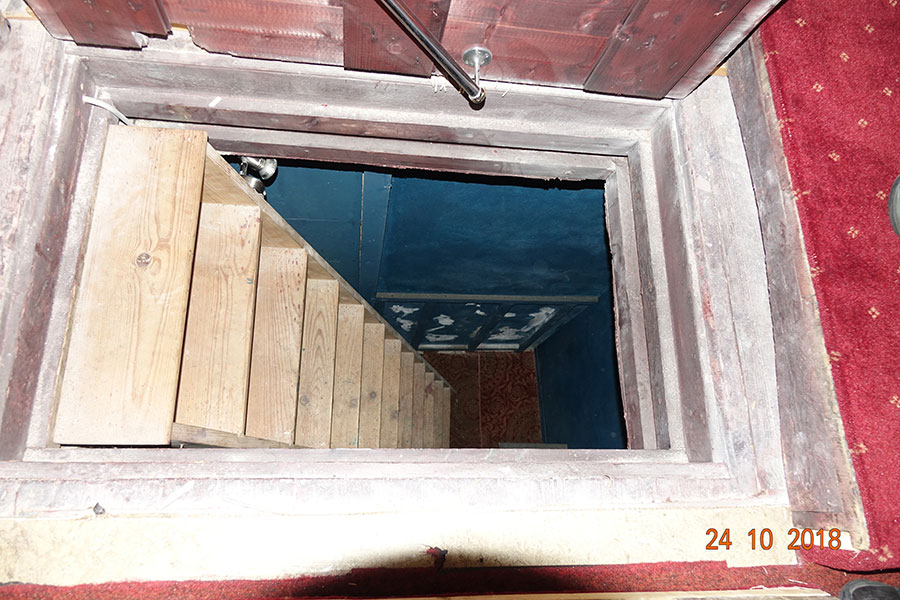 and here is Dean in it! 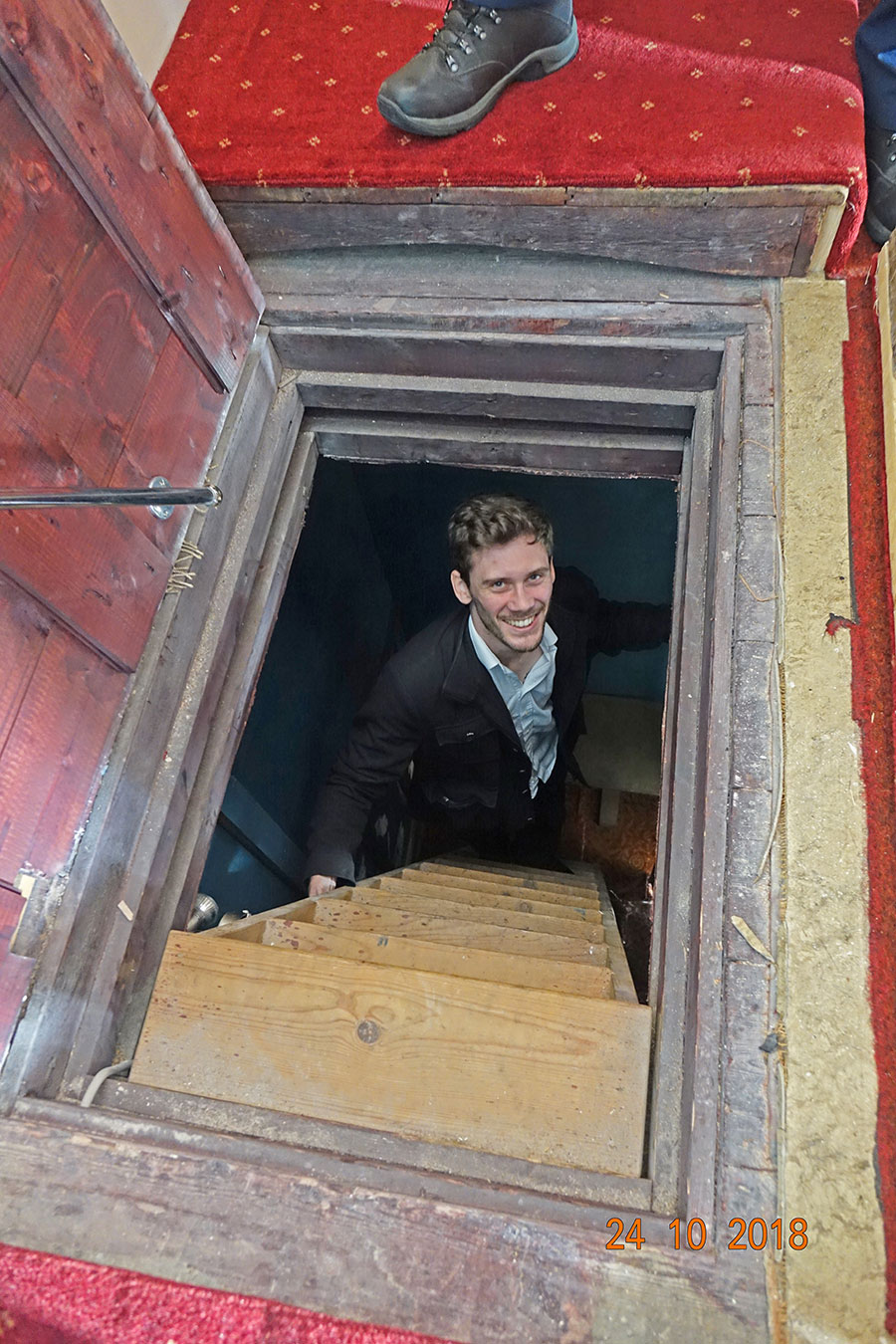 Below the Royal Arch room is the Grand Temple which has serious ‘Wow’ factor. Around the walls are the individual banners of the Prince Masons, an order which does not exist in England. It seems closest to the 18th degree of the Rose Croix. 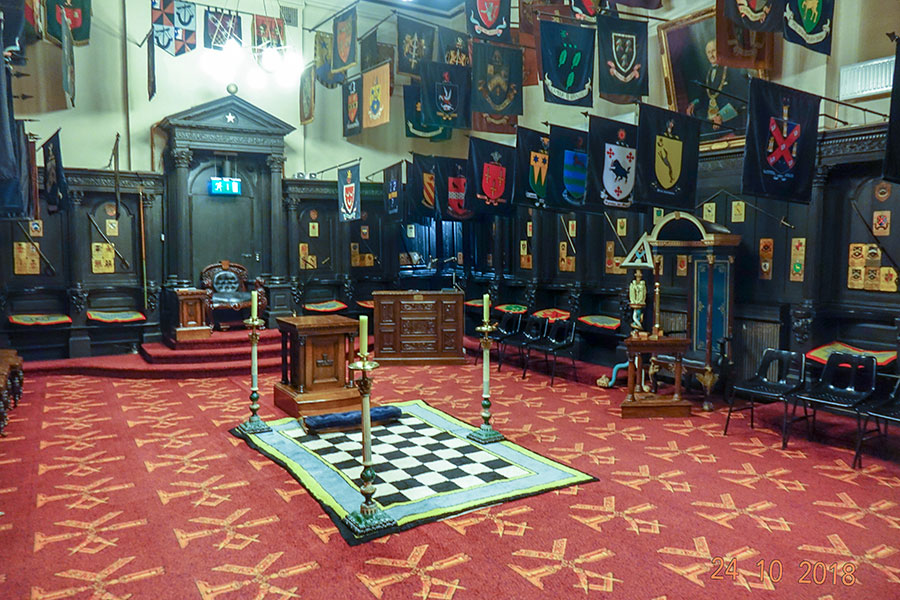 Each Prince has his own alcove where his sword and coat of arms are displayed. This is the alcove of our guide, Bro. Ken. The principal chairs in the temple are beautifully carved. 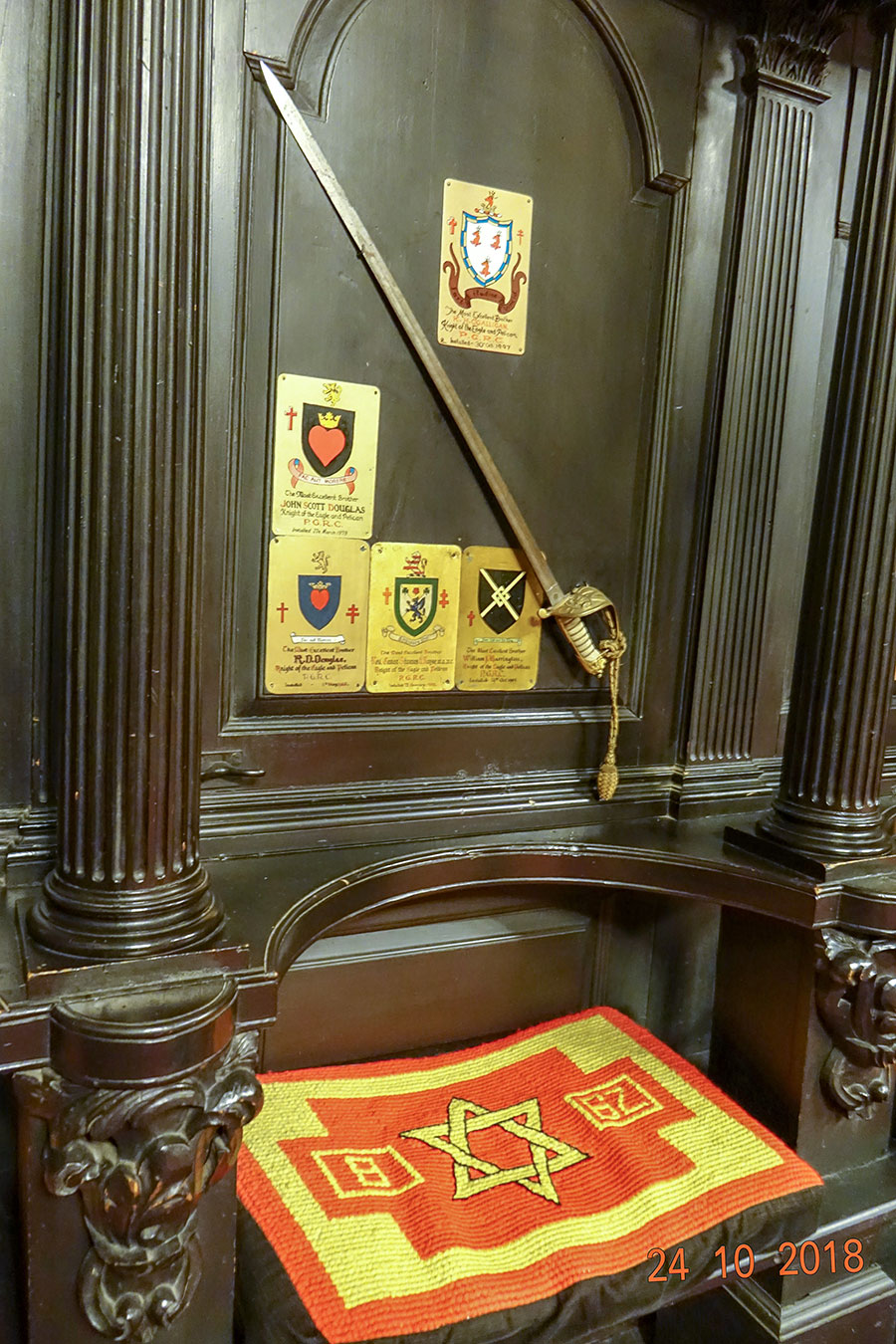 Here is Dean in the Master’s Chair, 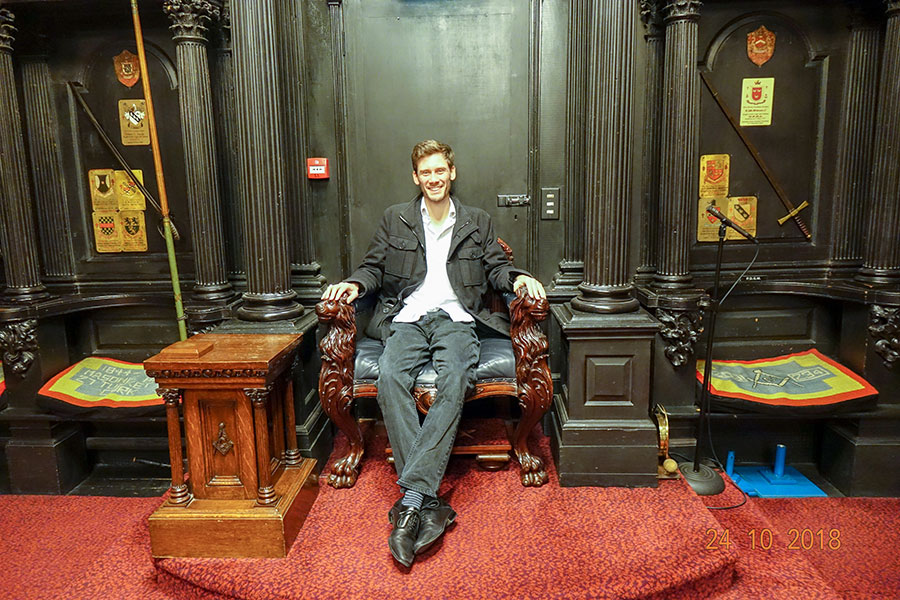 and here is the JW chair, known as the Lady Mason’s Chair. It is supposed to have featured in the initiation of Elizabeth St Leger, the first known Lady Mason. As you can see, the seat is considerably lower than normal. (An illustrated article about the first Lady Mason will appear on this site shortly.) 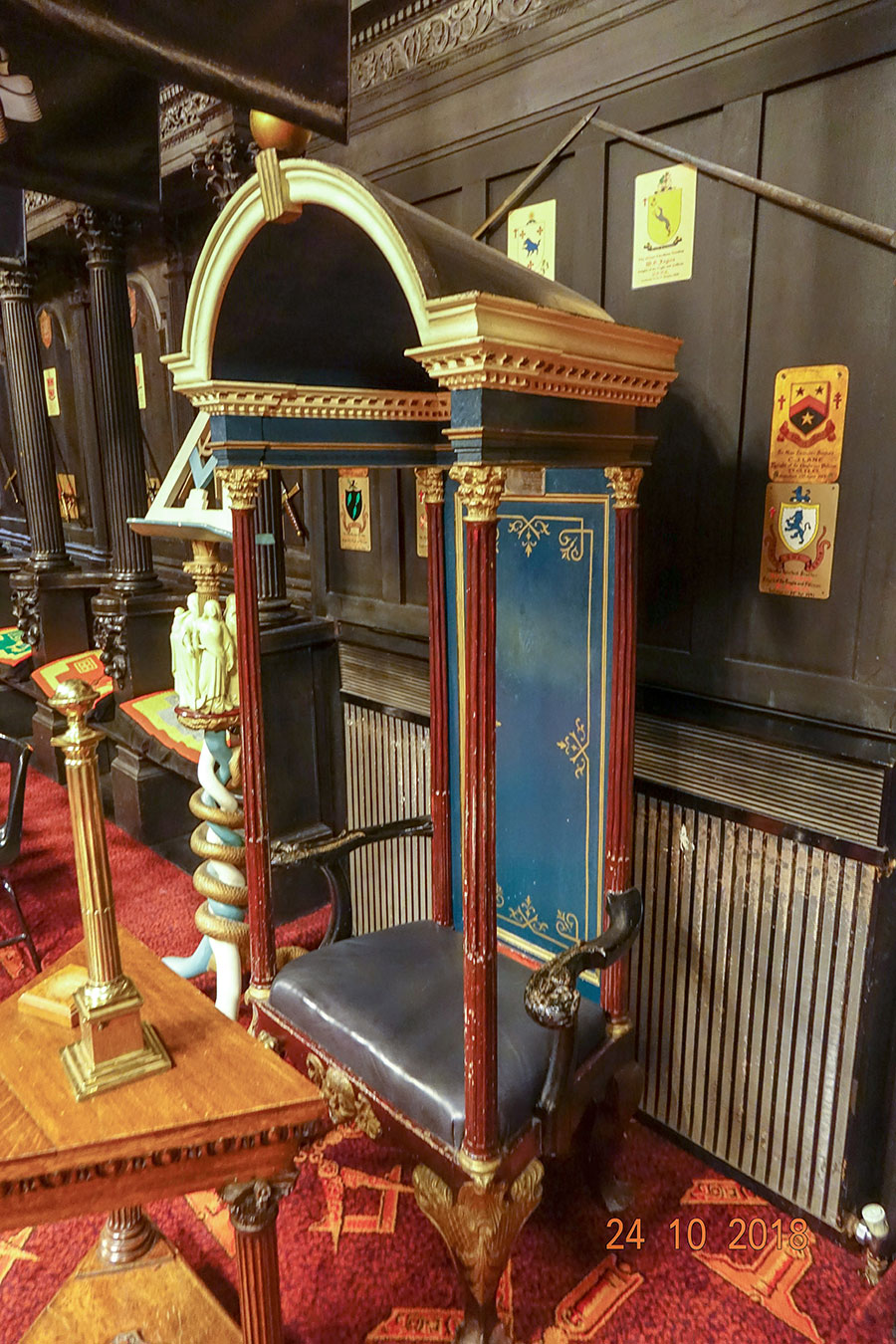 Having completed our tour, we set off on a walking tour, taking in the University on our way, 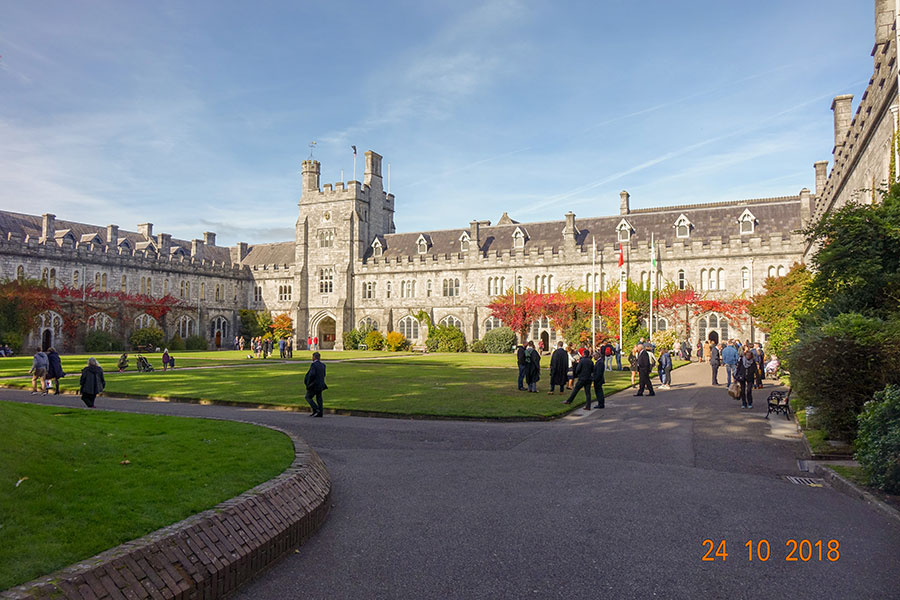 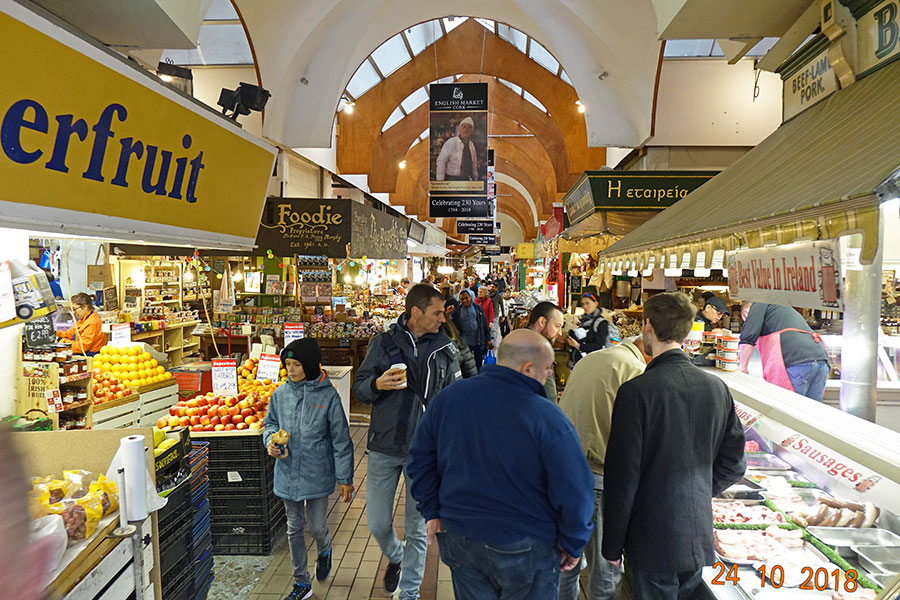 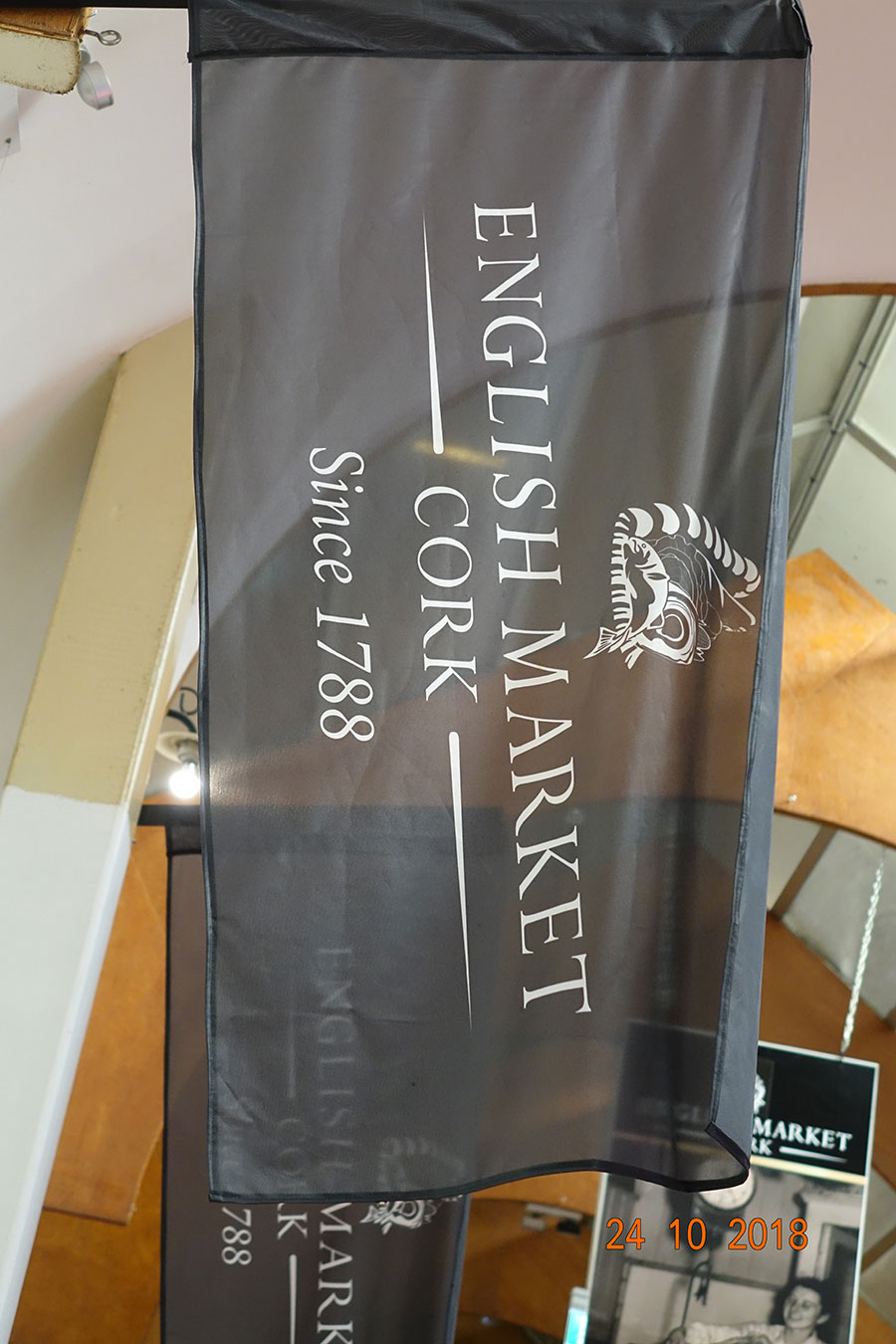 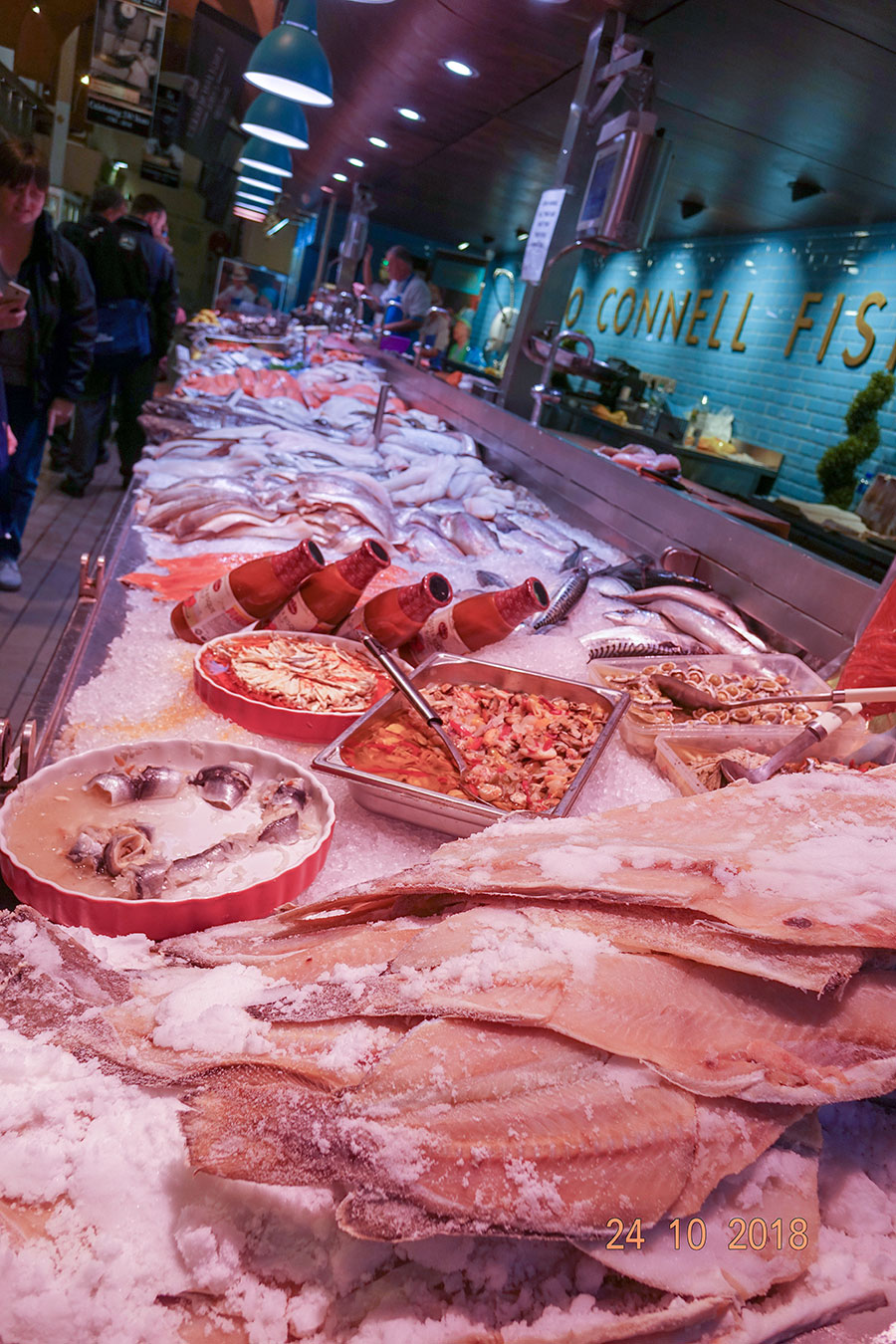 At this point, we thought it only right to visit some of the hostelries which abound in the area, 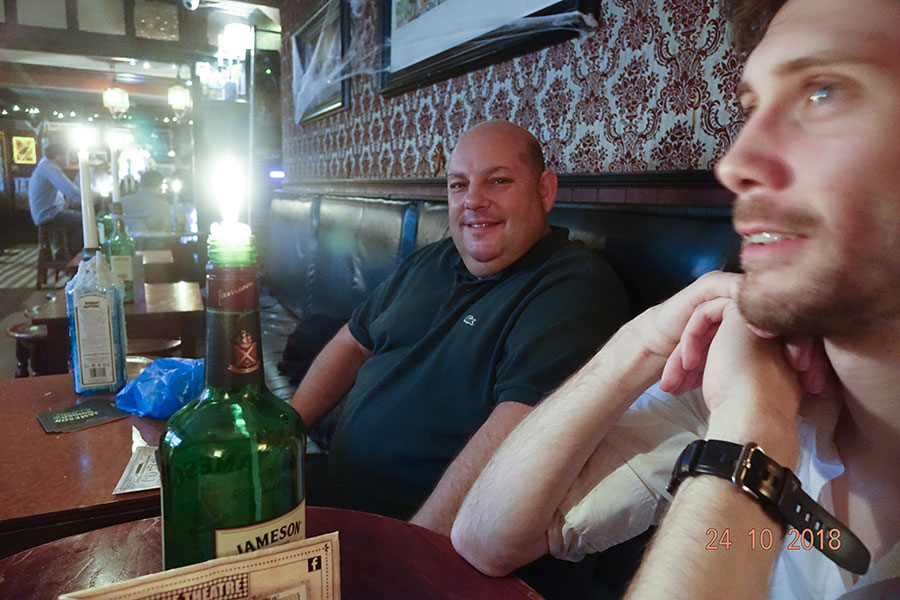 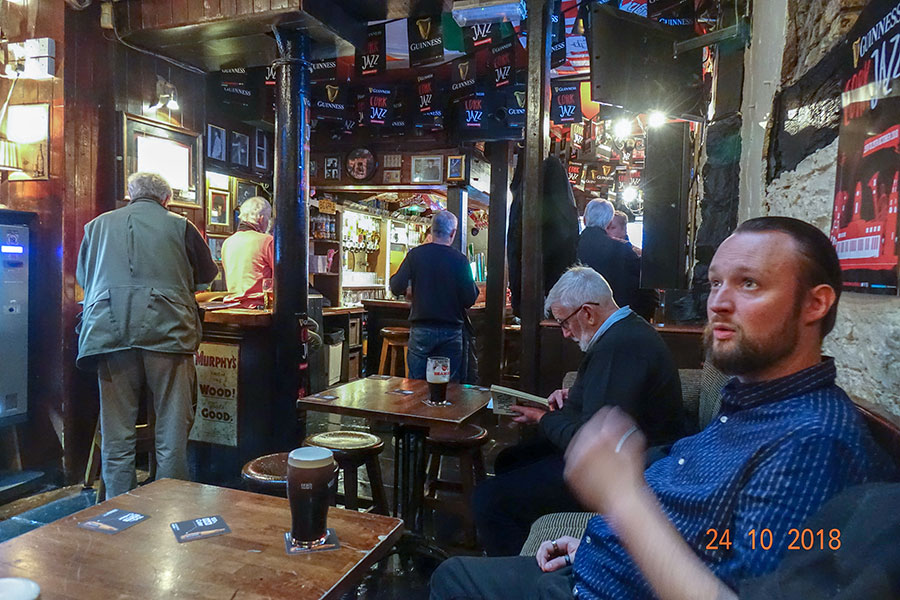 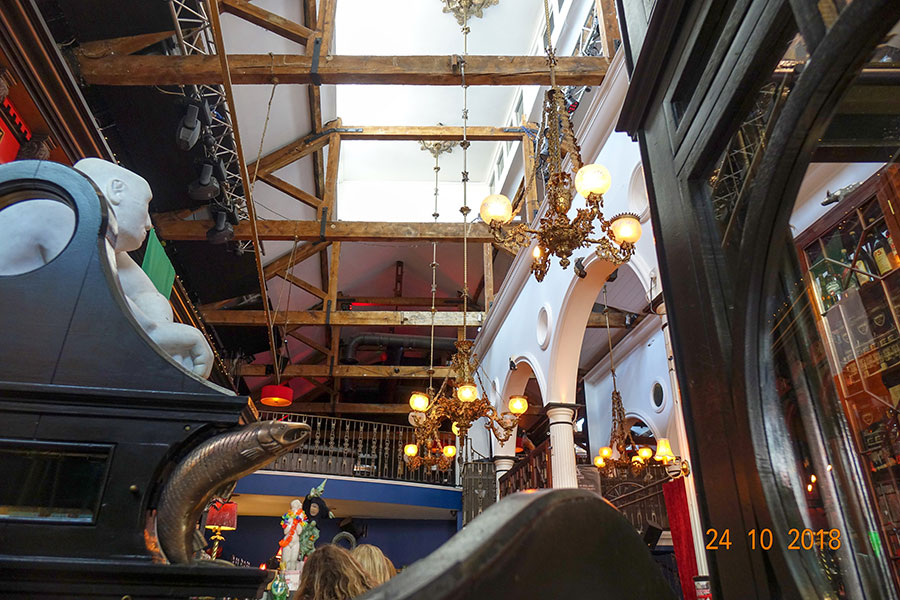 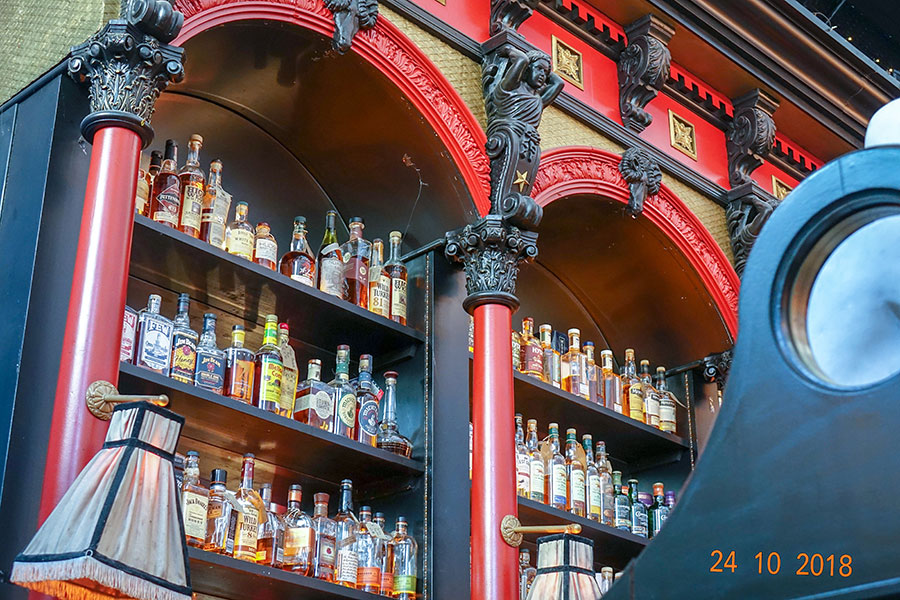 and in the last one lunched in 'own room'. 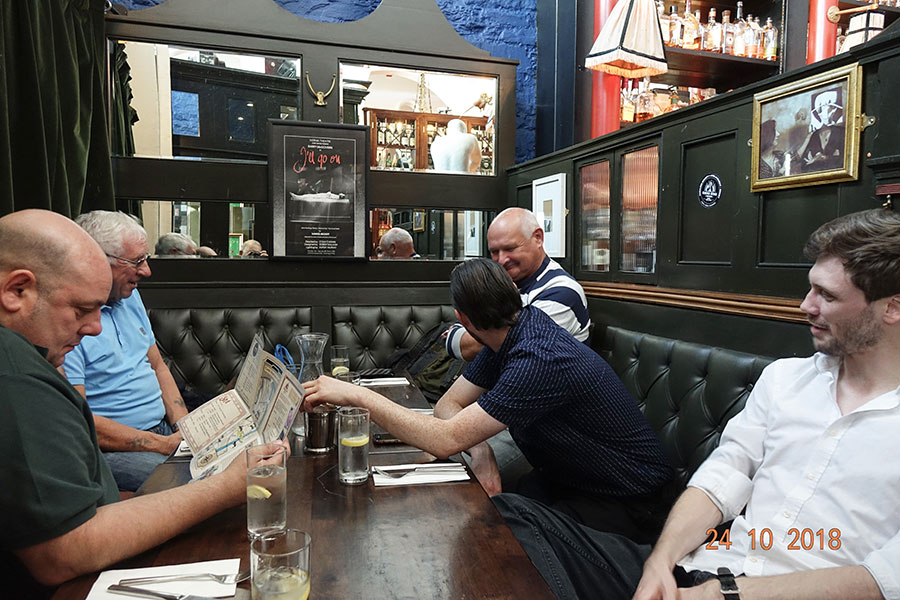 We were then driven to Cobh (pronounced Cove), famous for many things not the least being the last port of both the Lusitania and the Titanic. Having checked in to our hotel, we got ready for a Craft Lodge meeting where the working would be an initiation. Cobh (once known as Queenstown) is built on the side of a steep hill and to reach the temple we had to walk up that hill which felt almost vertical. However, we finally reached the lovely temple where we were made very welcome once more. 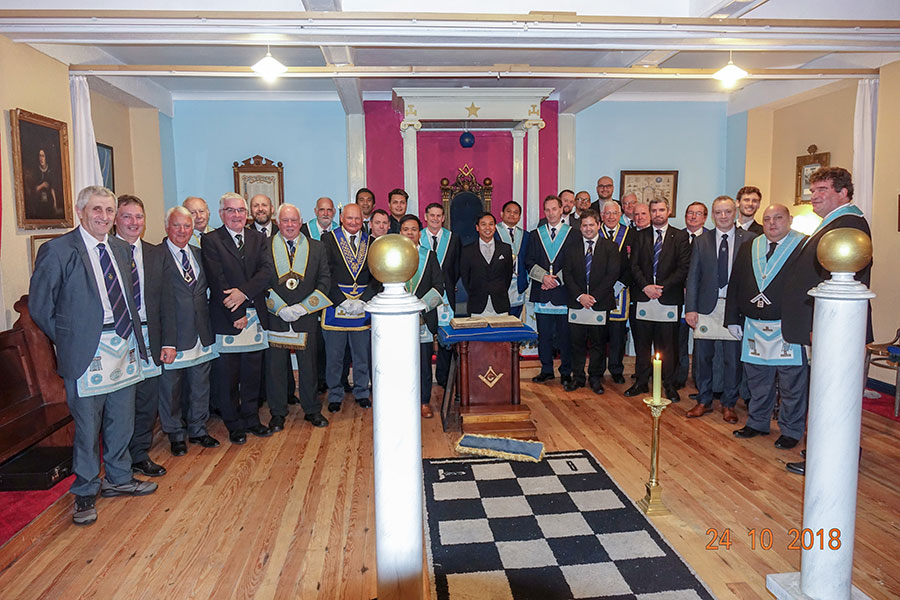 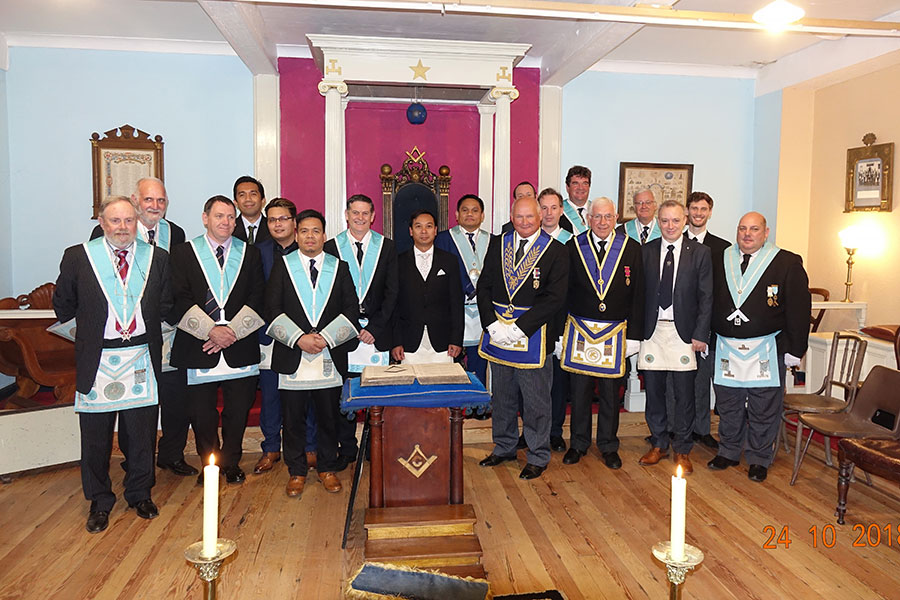 The ritual was very different and very much the same, if you see what I mean. Most significant was the obligation and the transmission of signs and tokens which took place in the centre of the lodge, by the JW and not by the WM, who however managed all the other aspects of the ritual. 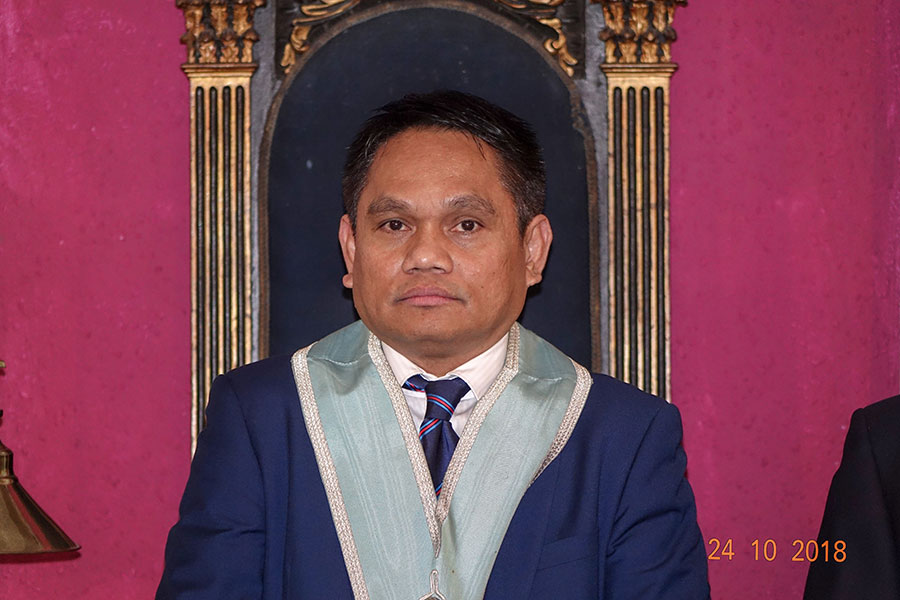 The ritual was superb, which just as well as the Deputy Provincial Grand Master was present.

Irish lodges rarely have festive boards but volunteers prepare sandwiches and coffee for each meeting which was most welcome.

We had to leave our hotel the next morning at 4.30 am so, for most of us, the evening’s festivities were curtailed. However some made it up another hill to a pub which featured great Irish music. All in all an eye-opening experience, enhanced by lovely weather and brotherly love. Grateful thanks to Bros and Companions Walter, Pat and Ken.