On Tuesday 16th July 2019 the Deputy Provincial Grand Master VW Bro Paul Reeves stood in for the Provincial Grand Master as the Consecrating Officer for the Lodge of Daily Advancement No 9979 at Saxon Hall, Southend. On the same day 50 years ago the Apollo 11 mission was launched with Bro Edwin ‘Buzz’ Aldrin becoming the first Freemason to walk on the moon.

The Provincial Grand Stewards team provided first class support throughout the meeting which was opened in the Three Degrees by the Worshipful Master of St Laurence Lodge No 5511 the sponsoring lodge. The meeting was called to order and the Consecrating Officer VW Bro Paul Reeves entered with the Provincial Consecration Team. After the opening hymn and salutations he addressed the Brethren on the purpose of the meeting.

The Consecrating Officer then called on the Provincial Deputy Grand Chaplain, Rev Michael Bradley, to deliver an Oration which he did by pointing out that some people see Freemasons as “apart” from society but we are very much “a part” of society practicing Brotherly Love, Relief and Truth and also said that 16th July was an appropriate day to “Launch” a new lodge.

After the Consecration the Consecrating Officer relinquished the Chair to the Senior Assistant Provincial Grand Master, Peter Hollingsworth who installed the Primus Master Alan Everard PSGD into the Chair of King Solomon. David West PPJGW was invested as the Immediate Past Master, John Davies PSGD as Senior Warden and Ian Simpson PAGPurs as Junior Warden.

The day ended with VW Bro Paul Reeves informing everyone that although the Provincial Grand Master had spent most of the day receiving treatment in hospital, he was delighted to learn the Consecration meeting had been so successful. To everyone’s surprise the PGM had directed VW Bro Paul to promote the Secretary of the new Lodge, W Bro Lawrie Morrisson, and invest him as a Past Provincial Junior Grand Warden. From the applause given followed by a standing ovation it was evident all wholeheartedly agreed with the Provincial Grand Master’s choice and everyone signed a souvenir card to wish RW Bro Rodney Bass a speedy recovery.

Particular credit should go to VW Bro Paul Reeves DepPGM, W Bro Peter Hollingsworth Senior APGM and W Bro Charles Elliott APGM who all stood in at short notice to do their roles along with W Bro Phil Lovelock as ProvGSec for his work behind the scenes and W Bro Geoff Turpin who demonstrated to all throughout the rehearsals and during the Consecration that he is an accomplished Provincial Grand Director of Ceremonies.

After the meeting the brethren dined in the Jubilee Suite and enjoyed a lovely meal, good wine and the companionship of their brethren. 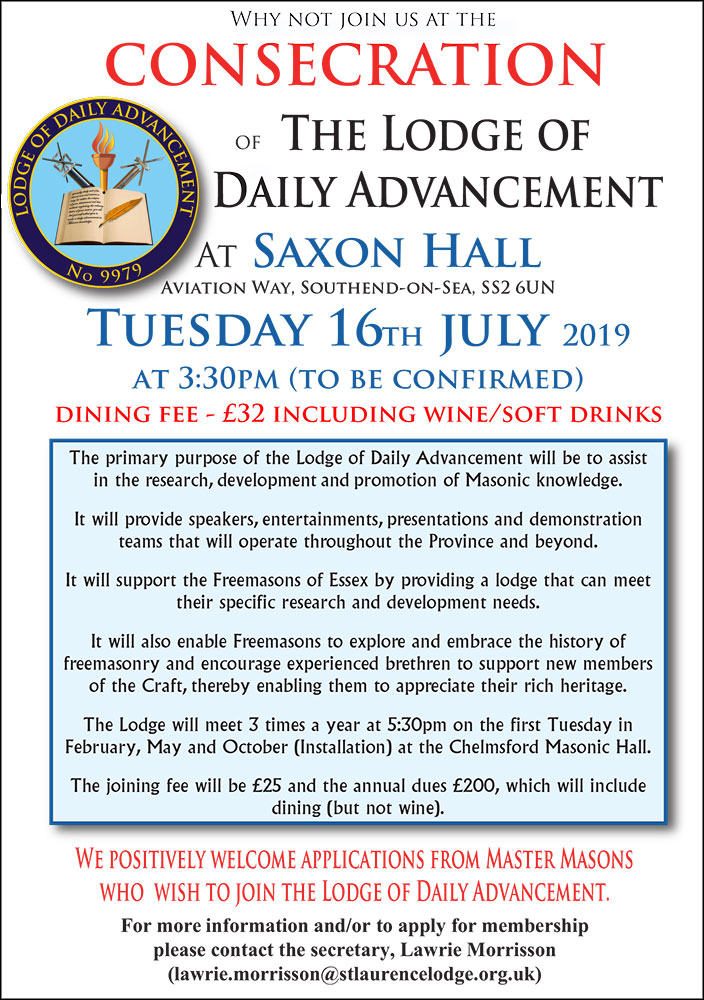