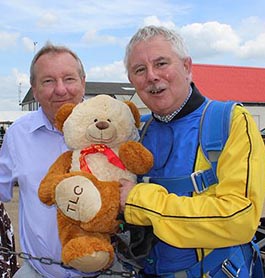 On the 12th June 2014, W Bro Terry Thurley launched himself from a small aircraft at 15,000 feet in aid of TLC (Teddies for Loving Care). Terry landed safely, knowing that he had helped to raise a £ for every foot he had travelled through the air. The £15,000 raised far exceeded the original target of £8,000 and is a testament to the generosity of Essex Freemasons.

Terry is the secretary of one of our sister lodges, Engayne Lodge No 6831 and is currently the Master of the Essex Provincial Grand Stewards’ Lodge No 8665.

And last but not least, a short slide show with music.