Freemasons’ Hall tours are run regularly throughout the week and are open to non – Freemasons.

Bro David Crow kindly arranged another Freemasons’ Hall tour for the brethren of St Laurence Lodge and three prospective candidates. Although many of us have visited the Hall on numerous occasions, it never fails to impress with its magnitude and beauty. Freemasons’ Hall is one of the finest examples of Art Deco in England and is maintained to a high standard. It has been used as a setting for various TV shows and films and also for other purposes such as fashion shows, product launches, conferences, dinner dances and drinks receptions. 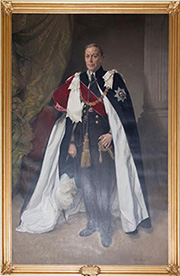 There are many paintings to be seen during a Freemasons’ Hall tour. This one is of King George VI.

George VI was Senior Grand Warden in 1923 and Provincial Grand Master of Middlesex from 1924 – 1937. He succeeded on his brother’s abdication in 1936 and was therefore never Grand Master. He was, however, appointed as Past Grand Master in 1937. He was also a member of Knights Templar (Past Grand Master) and the 33 degree Ancient and Accepted Rite.

George VI later installed the Duke of Kent as Grand Master in 1939 and later the Earl of Harewood in 1943 and the Duke of Devonshire in 1948.

The tour takes participants through Freemasons’ Hall and into the Library and Museum where there is a multitude of masonic artefacts including jewels, tools and aprons of beautiful and various designs.

During the morning our guide also led us past the Memorial Shrine which commemorates the 3,225 brethren who died during active service in the First World War and into the Grand Temple, which seats over 1,700 brethren.

After the Freemasons’ Hall tour seven of us retired to Wolfe’s Bar and Grill across the road and had a very enjoyable lunch. Cheeseburgers and white wine. How decadent!

A few photographs taken on the day can be seen below.