At our fourth meeting of the year we initiated another good man, Brother Peter Stevenson.

He was escorted round the lodge in an exemplary fashion by our Junior Deacon, Bro Fraser Betts, and challenged by our Wardens with positivity and authority.

The Worshipful Master performed the ceremony with the normal excellent command of the ritual we have come to expect and all his Officers gave their full support.

Brethren taking part in the ceremony included Bro Bona who gave the address on charity, Bro Jas Bassan who confidently challenged the Candidate on his ability to give in the cause of charity and Bro Lee Zetter who explained the working tools of an Entered Apprentice Freemason in a sincere and well rehearsed fashion.

Once Bro Peter had returned to the lodge, the Charge after Initiation was given by W Bro Cliff Phillips in an excellent manner and Bro Paul Newton delivered a marvellous rendition of the Chaplains’s Lecture on the Ornaments of the Lodge, which was well received by the Brethren.

During the meeting, W Bro Peter Hollingsworth PSGD, APGM presented the lodge with a Gold Champion Award for the support that the lodge had given the West Essex Hospices Appeal (WEHA). The WEHA strongly depends on donations and the brethren were pleased to hear that our support was second to none. 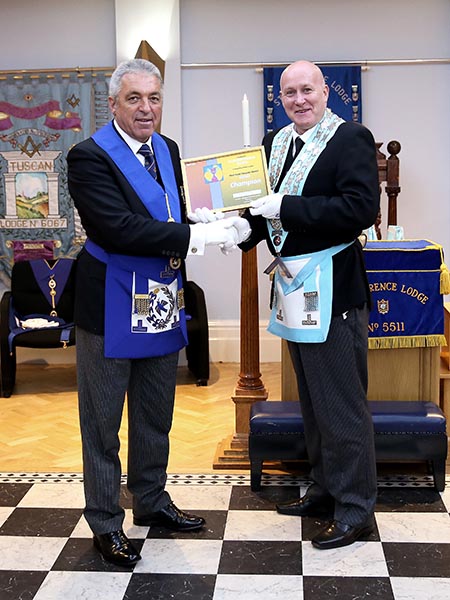